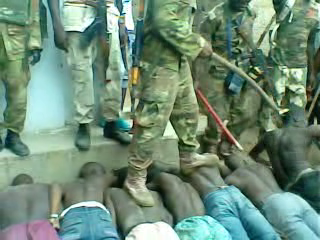 The ongoing conflict with Boko Haram in north-east Nigeria has inflicted terrible hardships on the local population and is now spreading to neighboring countries. Amnesty International has documented multiple war crimes and crimes against humanity committed by Boko Haram, including the killing of at least 5,500 civilians, as it rampaged across north-east Nigeria during 2014 and early 2015. Furthermore, according to Amnesty International, at least 2,000 women and girls have been abducted by Boko Haram since the start of 2014 and many have been forced into sexual slavery and trained to fight.

At the same time, the population suffered from grave human rights abuses by the Nigerian military. Amnesty International´s new report “Stars on their shoulders. Blood on their hands. War crimes committed by the Nigerian military” finds that the Nigerian military has arbitrarily arrested at least 20,000 young men and boys since 2009 in their response to Boko Haram’s attacks in the north-east. Almost none of those detained have been brought to court and all have been held without the necessary safeguards against murder, torture and ill-treatment. Moreover, at least 7,000 people have died in military detention facilities since 2012 due to starvation, extreme overcrowding, torture and ill-treatment as well as denial of medical assistance. In addition, the Nigerian military has executed over 1,200 suspects, including more than 640 on one day.

Dan Eyre from Amnesty International and one of the co-authors of this report will present its key findings and discuss their political and legal implications, both for the Nigerian government and for the international community, as well as next steps for the government of newly-elected President Buhari. How to address the threat that Boko Haram poses? How to address past abuses and prevent such atrocities in the future?